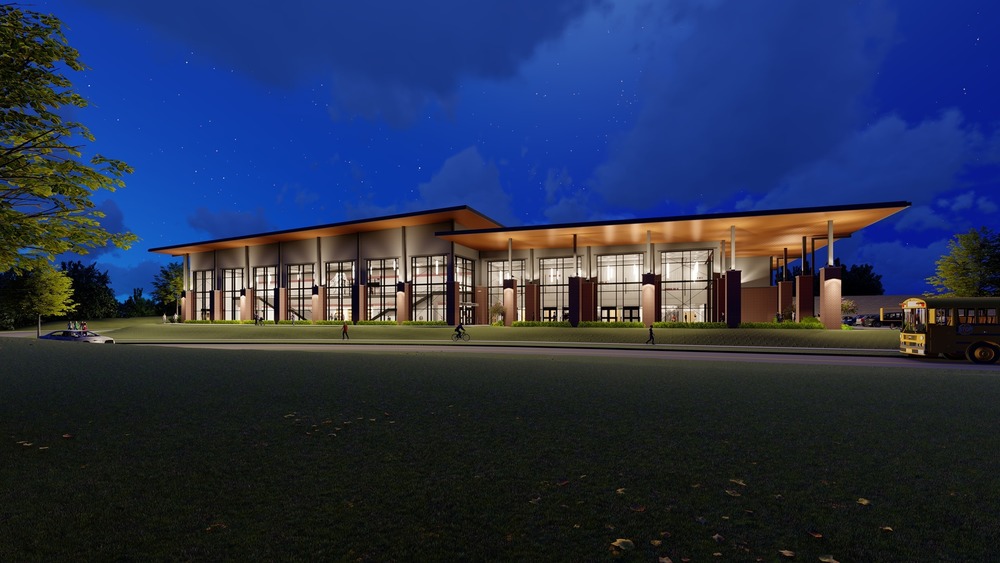 (Franklin, GA) — In a unanimous vote Tuesday, the Heard County Board of Education approved the construction of a new $18 million dollar facility to be located next to the campus of Heard County High School.

The construction bid was awarded to J & R Construction out of Carrollton, GA.

The state of the art facility will house two separate facilities under one roof. On one side of the structure, a new gymnasium will be housed which will be home to Heard High’s basketball, wrestling, and volleyball teams.

The new gymnasium will seat close to 1,500 spectators — doubling the capacity of the current gym.

The other side of the structure will be a home for performing arts. The new Heard County Performing Arts Center will be home to the K-12 Music program which will feature choral performances, band performances, show choir performances, and many other opportunities for community involvement.

The new performing arts center will seat 608 guests and will feature a state of the art sound system and lighting.

Heard County Superintendent Rodney Kay says the time has come for the new multipurpose facility that will benefit both sports and a growing performing arts program.

“The time is now because we have an aging gymnasium that is too small. We have children practicing until 8:00 PM in the evenings because there isn’t enough practice space in our current gym. We have a brand new volleyball program that is continuing to show tremendous interest and growth and there is a need for a larger facility for them,” stated Kay in a press release this week.

“Our wrestling program has grown over the last few years as well and they need the ability to host meets in a larger facility.”

Kay says that improved safety for student athletes will be one of the biggest benefits of the new gymnasium.

“Is our current gym usable? That answer is yes. Yes, it is, but in my 10 years here I have seen numerous kids crash into a wall that is placed way too close to the playing surface. I have seen high school athletes dive for balls going out of bounds and strike our bleachers which are just a few feet from the playing court,” added Kay.

“Our new facility will place the crowd above the court and remove the fans from having access to the floor and improve the safety of our student-athletes.”

Depiction of the interior of the new Performing Arts Center at HCHS (Photo: Jamison Barger/Southern A & E Architects)

Kay says the performing arts center is not a new discussion. It was originally part of the new Heard County High School plan back in 2010, but it was cut due to the total cost of the project.

“We have brought chorus back to HCHS with the addition of Nancy Heard. We have invested in elementary music by funding the necessary instruments and equipment through SPLOST dollars. We have hired and retained quality people in all of our music programs and we are proud that they will have a home for our students to display their talents for the community!”

Along with hosting choral concerts, band concerts and other events; the performing arts center will also boast a fine arts display hallway for students to display their artwork throughout the year.

Kay believes for our small community, there is a bigger reason that the time for construction is now — local SPLOST dollars.

“The Heard County School System has been able to build, modernize, and upgrade all of its facilities due to the community’s support of SPLOST. The school system has been blessed with local power plants who contribute nearly 40% of the annual SPLOST revenue we collect in Heard County,” Kay stated in the release.

“Due to the uncertainty regarding the longevity of local power plants, the time is now. There are regulations regarding coal usage which are making the plants around here less cost-effective to operate. I do not claim to be an energy expert, but I do know when things become less cost-effective there are usually dramatic changes or closings. If 40% of our SPLOST revenue is cut, this school system will never be able to upgrade the gymnasium or build a performing arts center.”